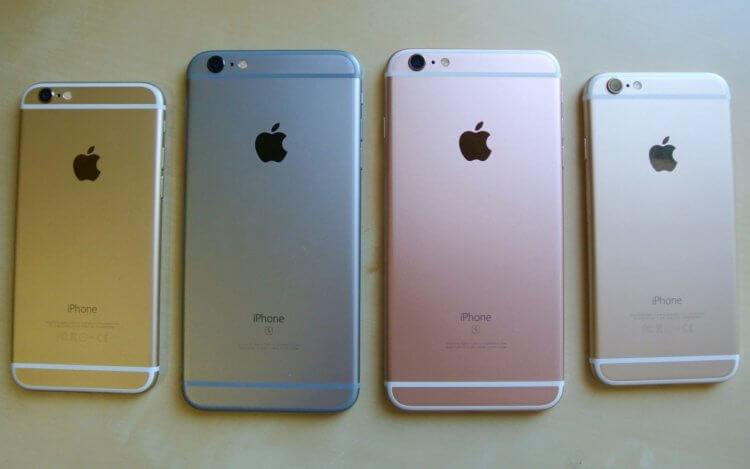 It was for this huge new market that the iPhone 6 Plus was created, the success of which was great – but, alas, did not meet expectations. And so, there was an attempt number two.

Mainland China, the most closed and mysterious of the industrialized countries of the world, Appley managed to open for their products not without difficulty. Local companies that are not obliged to comply with international copyright laws, without any conscience, copied everything they liked. Including mobile gadgets from Apple.

The market is huge, rich, and with its own specifics.

The iPhone 6 Plus and iPhone 6s Plus were also sold in other regions – but it was here that they were like at home.

urely in Apple reports are stored, in which it is calculated how much the iPhones 6s were in these 13 million and how many are the iPhone 6s Plus, with accurate data for all sizes of the flash file. But this, for some reason, is hidden by mystery.

On September 25, 2015, sales of “brothers” began in 12 of the most important for Apple countries, among which were China, Hong Kong (part of China) and Singapore.

According to experts, every fourth iPhone 6s / 6s + of the 13 million sold in the first 3 days of sales, was sold in Southeast Asia. 3.25 million. Basically – large mobile gadgets in golden and pink-golden colors.

This market was not easy prey: here it was necessary to compete with very cheap local developments “for a carbon copy” of recent iPhone models that looked almost prettier than the originals themselves – for the local taste. But inferior in quality of course.

And the iPhone 6s Plus surpassed all previous iPhone models in everything, it was thought out and optimized to the limit, it was spent on it 100 times more than on any of the cheap fakes. It cost, of course, not cheap, but its high price was justified.

Then the recession and the crisis came to this market.
Surprisingly – but true. The specifications were almost one to one identical to the iPhone 6s – the same Apple A9, with exactly the same CPU Twister overclocked to the same 1.85 GHz, and with exactly the same 6-cluster GPU, PWV GT7600. Same 2GB LPDDR4 (3,200 MHz), same NVMe.

Twister and Power VR GT7600 were sufficient for an almost tablet screen so that the tablet would not yield to the younger brother in anything.

But, nevertheless, there were differences. For example, optical stabilization with photo and video shooting. This is indeed an important nuance, we know people who have bought a large iPhone because of it.

The protective surface of the screen, the LCD itself and the sensor matrix were tightly connected to each other, tightly – which increased the strength of the tablet, but made it difficult to repair it.